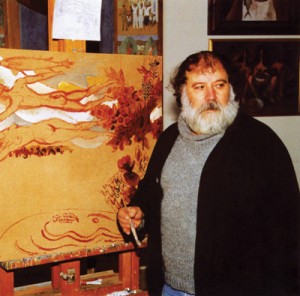 Tell us how you began your life as an artist?

I began drawing for as long as I remember, since I was two years old. There was a traditional shadow puppeteer (Karagiozis)  from my village, Kissonerga, and I remember that as my first contact with art. It was the only form of entertainment in those days, there was no theatre. This puppeteer had an immense influence on the village and especially on the children.

Then at school we had teachers that were great artists, such as Costas Economou. I was his student at school and later on in life, he helped and encouraged me with my first steps into the world of art. It was a period of time that was very different to today. Economou made teams of  young artists from the village that in turn exhibited their work there. We had a wonderful time then.
After that, I continued to work more systematically on my drawings and I would exhibit my work at least twice a year at the village club. Those were great days when we used to draw and paint for no profit, only for the love of art.

Did you further your studies after that period?

Unfortunately when I finished school I didn’t have the money to go and study. Even though my father would encourage me from a very young age to draw, he couldn’t afford to send me to study. So I went to Nicosia at an architectural office owned by Economou’s brother as an architectural designer for six years. I consider that time as being beneficial in my evolution as an artist later on.
Then I won a scholarship through a youth organisation after an exhibition I did in Nicosia. So in 1969 I went to Moscow. There I studied the language for a year and then did six years in art specialising in Monumental Art.

What is Monumental Art?

Your wife Mariam is also an artist. How did you meet?

We met at the School of Arts in Moscow. My wife is an artist, in fact all her family were artists. I had the great opportunity to meet them and to be positively influenced by their work.

And your daughter is studying art now?

Yes, Katerina is studying art. She’s the fourth generation artist. First it was Mariam’s grandparents, her mother, Mariam and I, and now Katerina.

When did you return to Cyprus?

After we both graduated in Moscow, we decided to try our luck in Athens. We spent a year in 1976, under emotionally difficult circumstances after the Turkish invasion of Cyprus in 1974. There I had two exhibitions. The one was with paintings, that I started when I was in Moscow, and were greatly influenced by the difficult times of those days.
In Athens it was difficult for me to survive emotionally as an artist because of what was happening in Cyprus. That cycle of my work was greatly influenced by the emotions of the invasion. So in Athens I found myself in a very different atmosphere where my presence didn’t coincide with it. If it was a different time, maybe I would be able to survive better there, not financially but emotionally.
So I wanted to return to Cyprus, because the situations were tense. I had another exhibition in Syros and then we returned to Cyprus, where I began my parallel lives as an artist and as an Art teacher.

I think my generation were living in better artistic situations than the older and the newer generations. What I mean is, the older generation of artists survived adverse conditions and prepared the way for us to come and flourish. We returned from our studies and found better situations, people were beginning to show an interest in art, attending art exhibitions, and purchasing art work. Then, there was the chance to teach art at schools, providing a steady income.

Is it detrimental for an artist to work at the same time as an art teacher?

I think that depends from the artist himself, how much he allows it to influence him. Education is part of everyone, it’s part of life itself, so I don’t consider that it influenced me negatively. The contact with people, the participation in social events can create a mixture of feelings, a contact with life, leading to emotions that are in touch with their surroundings.

And the younger generation of artists?

It’s difficult for them. A large number of artists have come back to Cyprus. Also, in the old days the artists really worked hard to study art, they had great passion and always strived to become artists. Nowadays, this profession has lost this drive because there are many that I can say are accidental. Meaning that maybe the schools of art throughout the world have relaxed their criteria resulting in easier admission. Also these days there’s more financial stability and we have come to a point where there are art students that are out of place and irrelevant to what they study. Unfortunately. That’s why I think we were the luckier generation of artists. Of course there are many talented young artists.

A young, talented artist in Cyprus, how can he project himself on a local and international level?

It’s difficult for an artist from Cyprus, within the current orientations of art, to be able to project  himself on the international scene because of the many circles and their objective point of view on art. We are not living in the era of Picasso or the Impressionists where their pioneering talent surfaced in their work. Today you have to promote yourself through specific artistic circles and such, and sometimes one might be irrelevant to the profession, yet through organized channels, is able to promote his work. This I think is difficult for the Cypriot artist to promote his work. We only have one organized system of promoting arts and that is the Ministry of Culture and Education. It’s either that or on his own.
I believe, of course, what is most important for an artist is his personal attempt in art, his work, how to better develop his work and himself.